Those things are the bane of my existence, I tell ya.  It’s been like putting lipstick on a pig.  And not fancy MAC lipstick, either.  More like iridescent, pink Wet N’ Wild that’s been sitting in a makeup drawer for thirteen years.

But lately, I’ve run into a non-cosmetic issue with those darn things.  The kids keep falling down ’em.
I asked Jack to re-enact his latest tumble:

He was all too happy to demonstrate.  Love that kid.

I’ve been fighting putting carpet on the stairs since we got them.  I’ve been convinced I could refinish them and make them awesome.  It’s not working.  They look bad.  Real bad.  There are gaps everywhere and cracks in them.  And apparently, they’re slippery.  I only put two coats of satin polycrylic on them after I stained them with the hopes that they wouldn’t be too slick.  And they’re not really all that slick, but for a 4 and 6-year-old wearing socks while chasing each other down the stairs, they spell D-A-N-G-E-R, Will Robinson.

I saw this runner makeover over at Little Green Notebook and used it as my inspiration.  I love the lines and color of this little rug from Ikea:

I picked up four rugs during a recent trip to Ikea and jumped right in.

I worked my way down, doing my best to stretch the carpet around the edge of the tread and staple it just underneath.  I found that if I stapled it on the white stripe, it was nearly invisible.

And at the end of the day, I was left with this:

Crazy, right?  Let’s take a moment and go back in time (a few months ago) and look at what I started with: 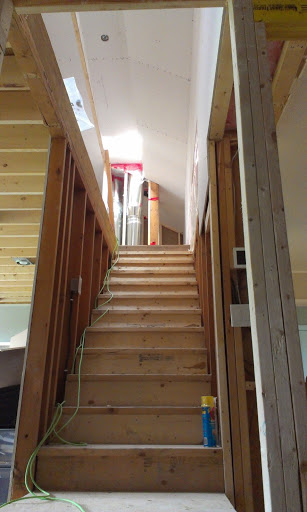 And with the magic of the internets, I have this: 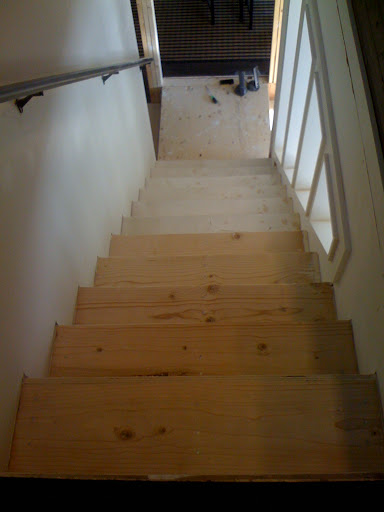 I especially love how the stripes look from this angle:

I still need to finish the trim paint on the faux stair skirt, and add a couple bits of trim, but those stairs have sure come a long way, baby.  I have no idea how the carpeting is going to wear.  And seriously, what was I thinking putting dark, charcoal fabric on stairs while we’re still under construction?  They show every speck of dust.  But I’m still very, very happy with the end result.  I’ll report back over the next few months and throw out an update.

5 thoughts on “What Goes Up, Must Fall Down (DIY Stair Runner)”